What is hard water?

Rainfall is the natural source for water in the UK. This water is originally soft but as it percolates through the rocks and ground it dissolves salts and minerals such as calcium and magnesium which contribute to making the water hard. Whilst the water is treated by water authorities, the treatment is only for microbial contaminants and sediment, with no treatment for hardness.

Hard water can cause a build up of lime scale on all water appliances, especially those that produce hot water such as boilers, hot water cylinders and calorifiers reducing their efficiency and increasing running costs. This lime scale can foul pipe work, valves and heat exchangers. In addition, scale build up can also cause issues by harbouring Legionella and microbial growth within water systems, both hot and cold. 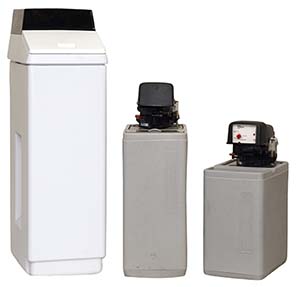 How do water softeners work?

The most common form of water softening is the use of ion exchange resins with an associated brine tank filled with salt to produce a brine solution. Within this type of system, the hard water passes through a column of resin, exchanging the calcium and magnesium ions from the water for sodium ions which are held by the resin. Depending on the type of softener used, the regeneration of the resin can be based on the volume of water passed through the column (volumetric), or a pre-determined time (time clock). In both cases the solution in the brine tank is used to backwash the resin bed, removing the calcium and magnesium ions and flushing them to drain, whilst exchanging these for sodium ions. The brine tank will require the salt levels to be topped up on a regular basis to ensure the production of brine, and continued softening of the water.

Why use a water softener? 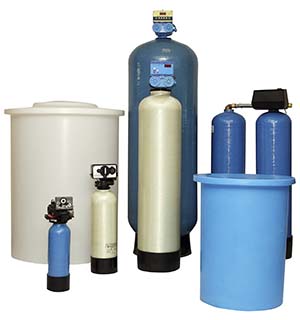 The use of water softeners will help to prevent the scaling of a variety of domestic and industrial equipment ranging from washing appliances, boilers and heat exchangers, preventing blockages and build up from lime scale, extending the life of the appliances and maintaining their efficiency. Existing systems on a hard water supply that have already started to form scale deposits can benefit from the use of a water softener. The soft water will start to de-scale a system over a period of time, thus improving efficiency and potentially reduce fuel bills and maintenance costs.

Water softening is also one of the key elements in the pre treatment of water prior to Reverse Osmosis.Soft water contains sodium ions which are easily rejected by an RO membrane, unlike calcium and magnesium which could potentially foul the membrane by forming scale, thus reducing the effectiveness, quality of water and through put of the RO unit. The use of a water softener pre RO is a must and will help to maintain the effectiveness and efficiency of any Reverse Osmosis unit, reducingdowntime and extend the life of the RO membranes.

Over and above the standard range, bespoke softeners can be built to client specification for flow rates. Controls can be tailored to suit requirements offering time clock, meter controlled, volumetric or hardness controlled set ups.